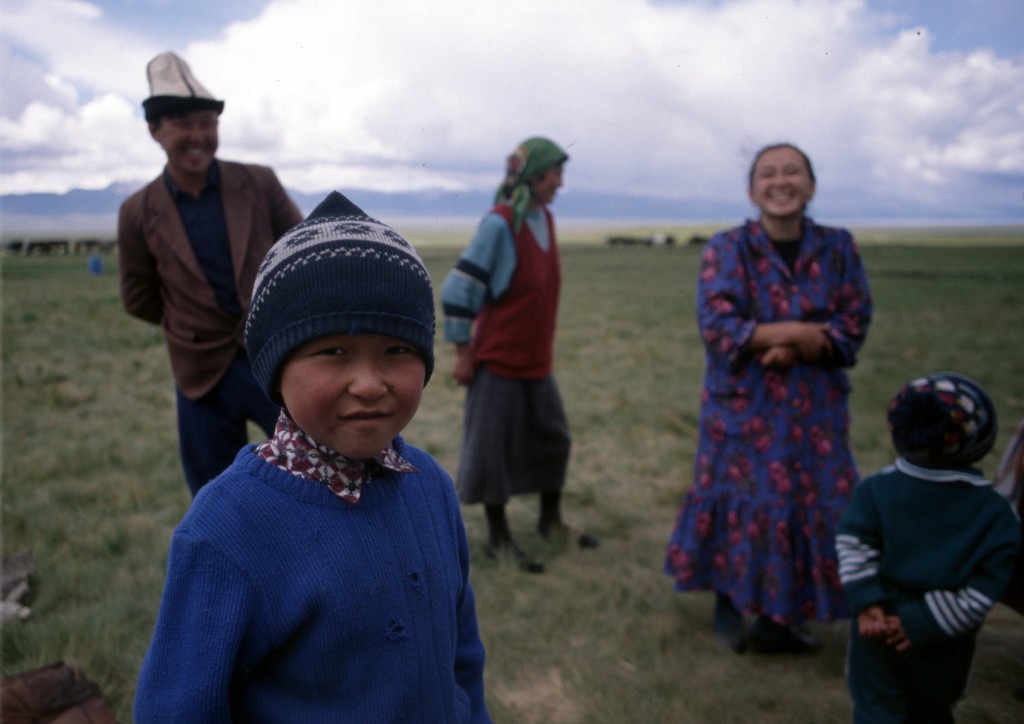 On the map, Son-köl is just a blue blot in the rugged contours of central Kyrgyzstan. But it’s the heart, we’d heard, of yurt country. We had to go.

So after a long climb through dusty valleys, gas generator-lit villages and glacial streams, we pitched a haphazardly-sited camp in cold darkness. Meteors streaked above as we fell asleep, wondering what landscape awaited.

Come dawn, tent flaps zipped back to reveal a turf plateau 3150m above sea level, ringed by dark, smoothly snowpatched mountains. On the vast green expanse, herds of horses swarmed over hillocks, and hawks rode air currents in the shimmering distance. The lake, a low blue sliver, pierced the plain’s western edge. Just discernible along its shore were a few off-white dots; more of these were visible through binoculars on the grassy slopes sweeping around us. Blue smoke tufted from some. Yurts.

Round wood-frame tents, covered in cloth and hide, are inhabited by nomadic herders across much of central Asia. The dwellings vary in name (Kazak kisü, Mongolian ger), but their portable, sturdy design has the widespread consistency of a classic. If you’re roaming San-köl’s grasslands — stalking a yak, marmot, Bactrian camel, or columbine, or just minding your own business — you’ll eventually find yourself drawn irresistibly yurtward, into the Black Hole of Kyrgyz hospitality. Some wizened horseman or bright-eyed youngster will approach out of the windblown waste and beckon you home for a visit. Accept — it’s a chance for fascinating insight into the detail of local life. 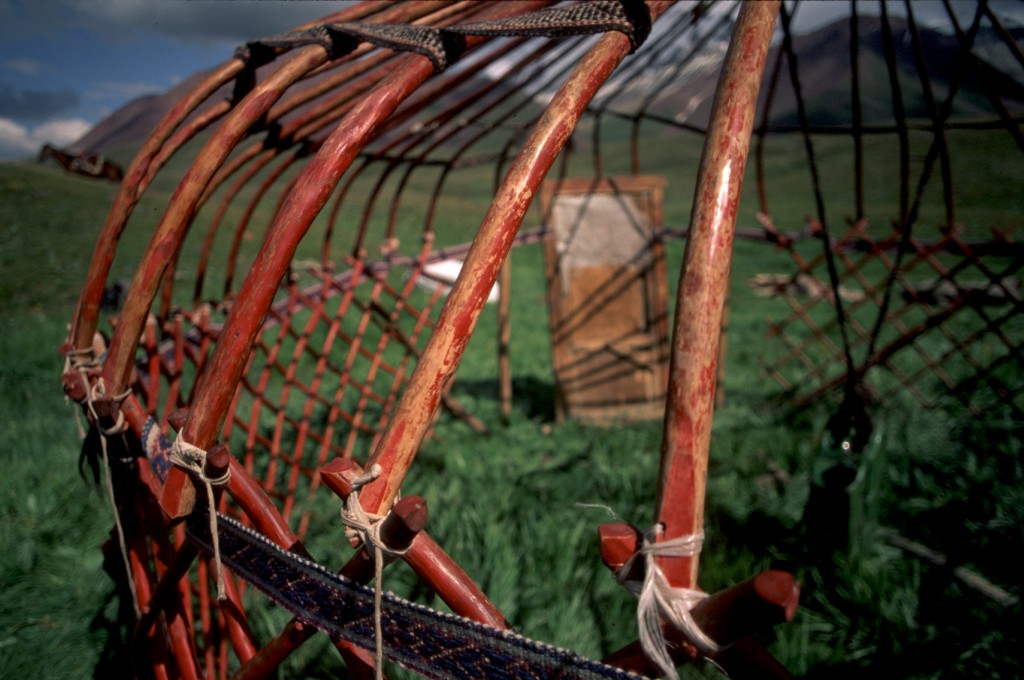 The first thing you may notice, after doffing your shoes (kept either just inside or just outside the tiny door) to enter, is that the floor is incredibly soft and cushy. Thick felt rugs called shyrdak are piled to insulate against cold and rocky ground beneath. Adjusting to the dim interior light, you’ll see rugs made by two main methods. Stacked variegated felt sheets may be cut as one — often in coarse symbolic figures such as stylized ram’s horns — and the cutouts fitted to their other-color complements, yielding sets of sharply patterned rugs. Or a big swirl of raw wool may be pressed and dyed in similar traditional motifs to yield a cruder (but often plusher) pad. Either way, yurts are cozy.

Most we’ve seen are about 4 to 8m across (depending on the neighborhood) and 2 to 3m high at the center skylight vent. A dung stove and maybe a hand-cranked churn typically sit just inside the painted wood door, with a low platform table — square to the door — toward the back, and sundry possessions (storage chests and bladders, clothes, utensils, lutes, drying meat, wool processing tools etc.) jam-packed neatly on the wall. The wall itself is supported by a latticed wood frame, and the dome by long spiral ribs; at a yurt-raising in a high Pamir meadow, we saw first hand how the owners tied the frame with wool ribbon for stability. 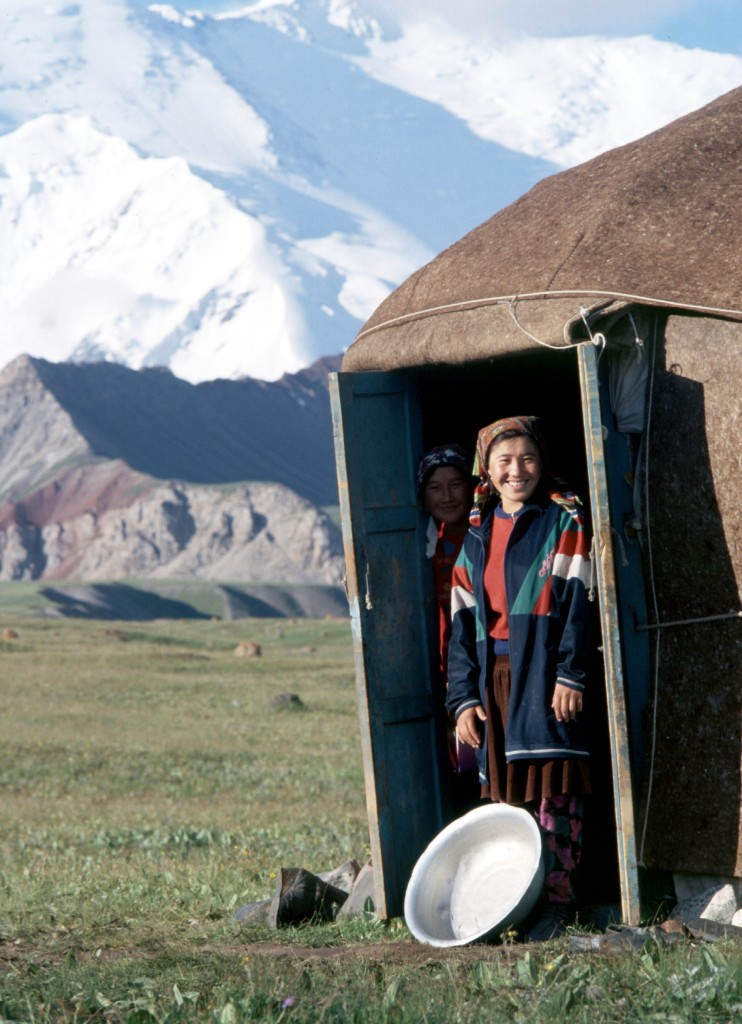 Yurts seem to accomodate about 3 to 7 residents — reasonable for a nuclear family plus a grandparent or two, though kinship relations of inhabitants we met weren’t always clear; at one Son-köl yurt, two apparent husband-wife teams milked mares tied to a line outside. This tricky job involves keeping a colt near each nervous mare throughout her short sessi on; the thin milk ferments to make that staple of the steppe, kumys.

In addition to the horses commonly tied within view of the door, each yurtstead we saw had a makeshift stock pen and a simple ridge tent for some cooking and odd jobs. Nomadic herding looks like a hard life, with plenty of work to go round in summer, when rich highland pastures are accessible. In September most of the families we met will haul their packed yurts down to valley settlements and dig in for winter. All the more surprising, then, that they were so hospitable in this time of focused work. Maybe it’s the thrill of new faces in an isolated place, but we were cajoled time and again by strong-willed new friends into a cup or two of kumys – some light, some stingingly acidic – and some jovial conversation. Ushered to comfortable floor spots around the back of the table, we’d sit longer than planned, tearing at rounds of egg or malt bread, scooping up rich curdled butter and exchanging questions and answers (as complex as our phrasebook would allow) about each other’s lives. One woman took a three-string qomyz from the wall and strummed a contemplative Kyrgyz tune in the sunbeam. We all fell quiet listening. 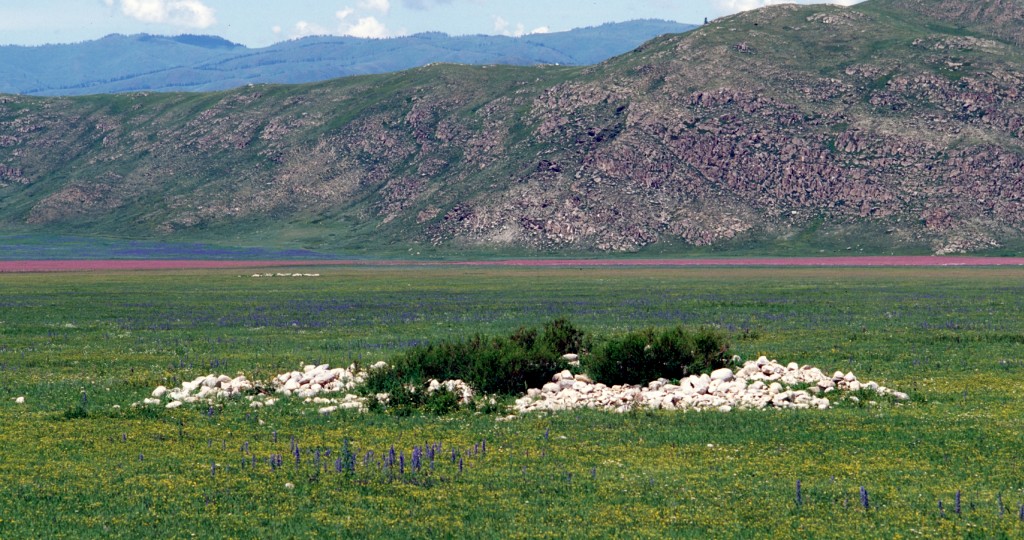 Anthropologists are divided on whether nomadic cultures like this one tend to emerge before or after the local establishment of agriculture. Some argue that nomads always depend on settled cultures for crucial goods and services, while others point out that a scarcity of archeological evidence for nomads preceding settled agriculturalists may just reflect lack of material accumulation in temporary settlements (like yurts). Whatever its origins, the itinerant herding lifestyle has deep roots at Son-köl, where kurgans, scattered low mounds visible as you look out across the basin, mark burial sites of early Indo-European nomads. Today, their Turkic-speaking, yurt-dwelling successors keep them dogies rollin’ along….

← How to Find Poetry in Shiraz
Cloning, part six: Poverty and exploitation →